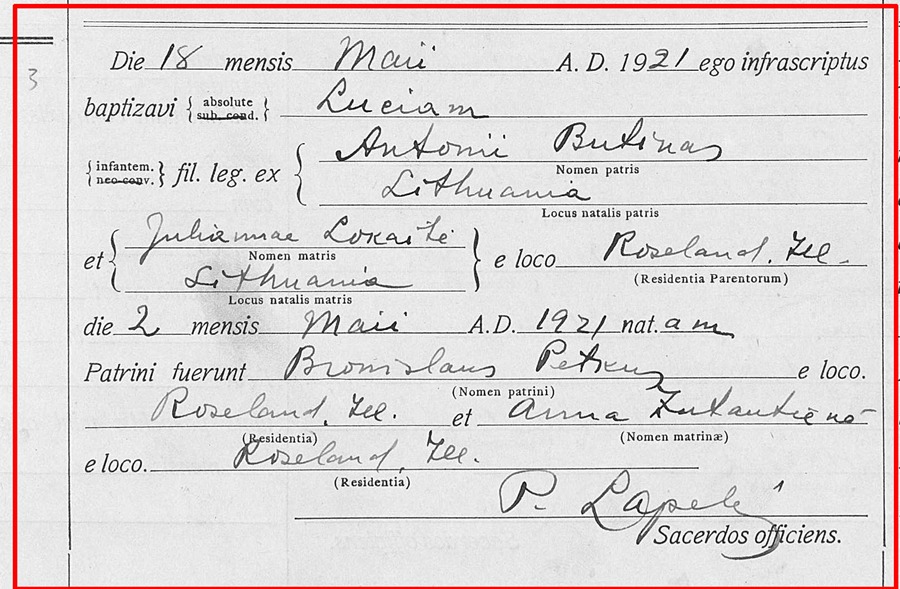 Refer to the image below, which is an image of entry 3 on register page 1 of the 1921-1925 baptism register of All Saints (Lithuanian) RC Parish in Chicago.  The format of this entry is typical of other entries in this baptism register.

In this example entry, the number "3" in the first column is the sequential entry number for this calendar year (1921). [The previous baptism register book (which had a different entry format) ended in April 1921. This is the third entry of a new register book.]

MY SUMMARY TRANSLATION OF THIS ENTRY (translated from Latin into English, except names translated into modern Lithuanian and name of baptized infant translated into English): Lucy [Lith: Liucija], the daughter of Antanas Butinas and Julijona Lokaitė, was born on May 2, 1921 and was baptized in All Saints Lithuanian Roman Catholic church in Chicago on May 18, 1921. The godparents were Bronislavas Petkus and Ona Žutautienė. The priest was Rev. P. Lapelis.

​​MY COMMENTS ABOUT THIS ENTRY: